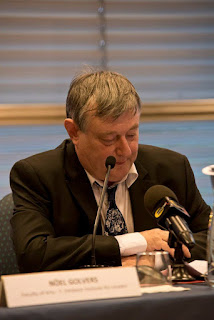 «Let me conclude this all too quick overview by expressing – carefully but firmly – my conviction that after the publication of these materials, which by this edition receive a maximal accessibility, many aspects of the cultural history of Portugal in the Early Modern period should be re-visited and re-written, as it brings the religious institutes (again) in the center of the perspective, where their historical position was, and one should look from now on to history of reading and science, and the Ideeengeschichte in Portugal through the prism of these libraries’ holdings. This is the highest thinkable legitimation of the investment of energy and money behind this project, and at the same time is the best possible argument for the decision to continue and for the further intensifying of this project, as part of an international, European ‘renouveau’ of the study of national book heritage. This is my most sincere wish for this enterprise, to which I should add nothing else anymore, I think. »
Publicada por H. Leitão à(s) 13:00